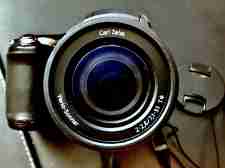 Toronto. In 1926 Zeiss formed Zeiss-Ikon for its government. The goal was to streamline the redundant over-lapping cameras made by the German camera factories. Belatedly, about a decade later, Zeiss realized that the minicam had taken over the amateur box/folder market and in some cases the unwieldily and heavy professional cameras too.

To compete with the tiny Leica, Zeiss designed and manufactured the Contax line of 35mm cameras determined to beat Leitz in every technical decision. When Leitz introduced interchangeable lenses, Zeiss was there. For years the two companies locked horns on who had the better cameras; the better lenses. To this battle, Zeiss offered many lenses including the famous Sonnar series.

Long after the second war, Zeiss dropped all cameras but continued to sell lenses. One of the companies using these high quality lenses was Sony in Japan. The lens above is a beautiful Zeiss Vario-Sonnar with a focussing range 0f 7.1mm to 51mm with a maximum aperture of f/2 to f/2.8 and the Zeiss company’s patented T* element coating which seriously reduced the internal reflections allowing much high contrast images to be made. Using a relatively small 4 colour, 8 megapixel, sensor, the lens was rated as 28mm to 200mm in 35mm film camera equivalents.

The F828 went on the market in 2003 replacing the flagship Sony F717 model. Sadly the camera suffered from purple fringing in some light and the Vario-Sonnar had serious geometric distortion at either end of the zoom range in the days when it took special software to correct distortion. two years later in 2005 it was replaced by the even shorter lived Sony R1. The R1 had a quieter and larger sensor using a 3 colour pixel configuration, a bit larger than the size of the so called 4/3 sensors used in non Sony mirrorless cameras.

The 717/828/R1 cameras were robust professional models known as bridge cameras. They lost out to the market desire for DSLR cameras. Sony bought out the Minolta SLR line from Konica to leap-frog into the DSLR market in 2006, replacing the R1 with the Sony Alpha models.  When Sony did embrace the mirrorless market for amateurs with the NEX-3 and NEX-5, they chose to use the APS-C size sensor which was even larger than that in the 4/3 system.