Some Thoughts on the NEX-6

The end of January 2013, when Vistek offered the NEX-6 and kit lens on sale for a great price, I leaped at the chance. Sold out! Oh Well, I left my order up anyway. To my surprise and delight, the camera arrived a week and a half later.

The NEX-6 is nice to use. Compared to my NEX-5, it is much faster in operation, has the flash built-in, and most importantly, it has a superb eye-level viewfinder built-in as well. Less important is the standard hot shoe and wi-fi capability. However, I have found the wi-fi capability of the camera to be very useful for remote shooting and image uploads. In terms of applications, Sony is no Apple by a long shot. The best you can say is that the Sony apps don’t crash… I eventually got the wi-fi apps to work, sort of.

Using the Smart Remote.
The NEX-6 camera is used as a wi-fi hot spot. Through the Apple App store I downloaded and installed the PlayMemories Mobile app on my iPod Touch. After connecting my camera to the internet, I downloaded the companion Smart Remote app from the Sony store. To use the iPod Touch or a smart phone as a remote, switch the camera menu to Application and click the Smart Remote icon. Change the iPod Touch from the current network to the NEX-6 camera network using the password the camera application displays.

Nowhere on any Sony site, or in the many web site reviews does it mention that the Play Memories Mobile app switches the camera to “fine jpeg” quality regardless what RAW quality setting is chosen on the camera (that is, both RAW, and RAW+JPEG switch to fine jpeg while the two remote apps are being used). At least the two apps are consistently reliable…

Uploading to a Mac via wi-fi.
To upload images to a computer, the Mac is totally neglected. The app Play Memories Home is simply mentioned to be Windows only. Browsing the internet, I found an app for the Mac called the Wireless Auto Import app – on a Sony site. Sadly, the instructions are are primitive. Once installed, the app can be woken up in the background and will import correctly to a folder labelled yyyy-mm-dd. The secret to repeated use? After importing to the Mac DO NOT CLICK Close on the WAI monitor window. Instead click Show in Finder and the WAI monitor window closes. Next, simply close the finder window. If you click neither button the WAI monitor window stays open even when the camera is switched off. 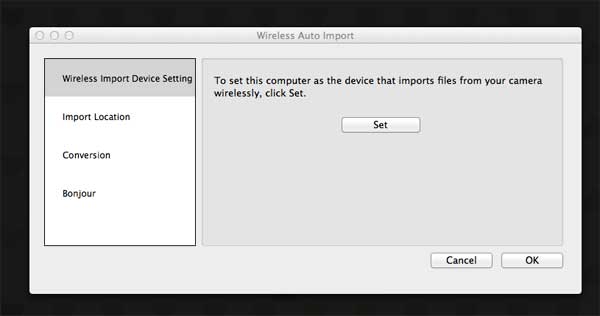 Wireless Auto Import main screen. This application will import images from the NEX-6 to the Mac. At left is the menu. By default all images are stored in a date folder in the Pictures folder. By clicking on “Import Location” a custom spot like the desktop can be chosen. On line instructions are relatively clear.

WAI Dock Icon on the Mac. While in use the above icon appears in the Mac Dock. The tiny dot at left here indicates the application is in use (my dock is set vertically to the left).

The WAI Monitor Window while uploading images. This window appears in the lower right of the Mac desktop while image files are being uploaded from the camera to a Mac folder.

The WAI Monitor Window after finishing an upload. Two buttons appear below the “completed” message. Click on “Show in Finder” and this window disappears and the Finder opens, leaving the WAI app ready to run again so you can upload images. You can then click the Finder window closed to finish. IF YOU CLICK THE “Close” button, the application will be be closed and the tiny dot on the dock extinguishes (so does the dock icon unless the Keep in Dock option is chosen) and the WAI app WILL NOT BE FOUND LATER by the camera. DO NOT USE THE “CLOSE” BUTTON.

Sony can easily fix their apps.
1. Let the Smart Remote/Play Memories Mobile save shots in the image quality as set on the camera, and not revert to “fine jpeg” while the remote is in use.

2. Clearly refer to Wireless Auto Import in the camera manuals and make the Close button simply close the app, not quit the app – as per standard Mac operation…

Tintype Studio talk.
On Wednesday February 20, 2013 Two of the four Tintype Studio principles presented a great talk at the Toronto PHSC meeting. These are a few of the images I captured with my new NEX-6 camera. They have been processed from RAW files via Lightroom 4. 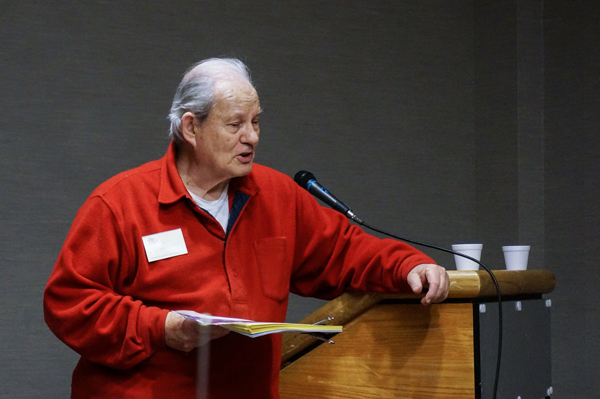 Photographer Wayne Gilbert. Our Membership Secretary discusses his journal questionnaire before our guests begin to discuss the tintype and their involvement with this old wet-plate technology. 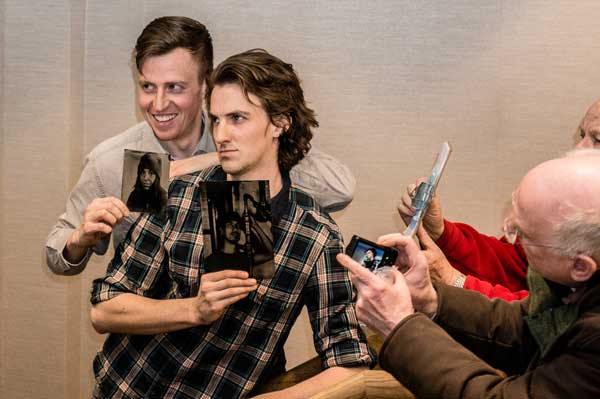 The Tintype Studio speakers (Paul Sergeant, left and Greg Snow) pose for photographer Bob Lansdale (Bob isn’t shown here, but he is on the far left of this image). The artists are holding examples of their work as Tintype photographers. After their illustrated talk there was a very lively Q&A session. 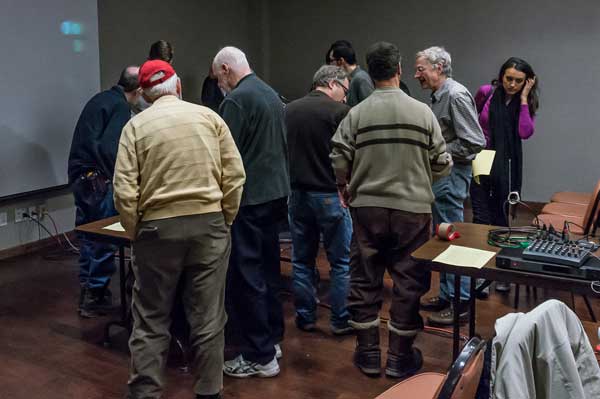 After the talk. A small collection of enthusiasts gather around to quiz our two speakers even further.

Update March 1, 2013.
A Mea Culpa seems in order. I can close the WAI app and still make future uploads work smoothly. 🙁 Tonight I had no end of difficulty making the wireless connection work. The camera always found my Sympatico Router but couldn’t connect through to the Mac and download the images. Nothing showed on screen or in Finder BUT when I did an IMPORT in LR4 I discovered TWO NEX-6 devices were shown, the first with no images and the second with images already uploaded but not deleted.  When I removed the camera, the devices fell to one empty NEX-6 that was persistent even after terminating LR4.

Rebooting my Mac made the extra device disappear in LR4 and the camera and WAI worked properly. Leaving LR4 open while I tried a download again seemed to block the camera so I hid LR4 and tried again. It worked okay. I can regularly click CLOSE at the end of the WAI activity and restart the WAI to do another download. It seems to happen if I run the WAI Icon once again. This without making WAI automatically start on startup. Then the Mac stopped recognizing the camera again. Weird.

Update March 3, 2013.
Still have a flakey wifi experience. Gave up using it last night. Today I turned the camera on, started the upload to computer menu item and moments later the camera woke up the WAI app and began to download. No luck repeating it. Then I turned the camera off for a minute before uploading and the WAI and camera made sweet talk together and the images downloaded successfully. And I didn’t try clearing out the camera memory card in between downloads…

Okay, both Sony apps appear to be working. The key is to shut off the NEX-6 before selecting a menu item to move the pictures to computer via Wifi. That is, don’t simply empty the memory card, record new images and switch to the menu> playback> send to computer. Shut off the camera wait a few seconds, turn the camera on and then choose the menu item. And CLOSE also works correctly.