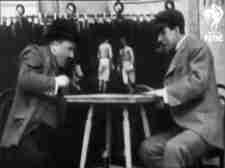 Toronto. trick photography in films goes back over a century. Take this Pathé home movie film short from 1903 called the pocket boxers. An image of two boxers is superimposed on a pub table top using the dark curtain as a back drop. The two gentlemen produce and remove the boxers with a sleight of hand. Their actions in between are matched to the boxers.

This example shows how film could be manipulated to use two different sizes combined by using a dark backdrop for the one film that matches the curtains in another. In a similar fashion modern day TV News uses a green screen to superimpose the news/weather readers and slides and videos so the people seem to be in front of the scenes.

My thanks to George Dunbar for discovering and sharing this old Pathé movie with the clever merging of the pocket boxers with the pub folk.