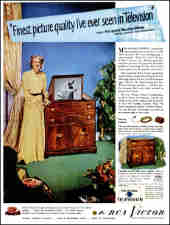 Toronto. After the war ended in 1945, our main source of information remained newspapers and radio. No TV, no internet, Nada. We played board games, bought magazines, and read books. The exciting thing was the imminent arrival of TV in Canada! Our first TV stations began to broadcast in 1952 while those who lived along the border could watch American TV a few years earlier. This was at a time when the vast majority of photographs were still black & white.

In the 1940s, Margaret Bourke-White was a well known LIFE magazine photographer. To emphasize the resolution and detail in the black and white projection televisions, marketeers used celebrities as spokespeople. And who better to assure everyone that RCA Victor projection-TV was sharp and clear but a world-famous photographer? In spite of the ads, in August 1949, TV was monochrome, low resolution, small screen, and expensive – about 8x more than a good console radio set.

To get a larger image than that offered by a 9 inch or 12 inch (diagonal) cathode ray tube (CRT), one had to spring for a projection set using a higher intensity, smaller CRT projecting the image on a screen.  While still larger than a CRT, the projection screen is like a slide show but much smaller, using back projection so the projection tube is hidden.

By the 1960s, CRTs were reliably made in larger sizes, making the fussy projection sets impractical and they faded into history in spite of photographer-promoted ads a decade earlier. Need a video today? Wait ’til I get my smartphone 🙂

This entry was posted in miscellaneous and tagged LIFE, Margaret Bourke-White, projection, TV. Bookmark the permalink.