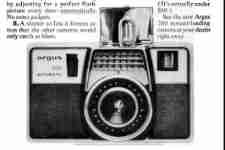 Toronto. The giant Kodak corporation of mid last century dictated film sizes and packaging. One of their extensive studies showed that amateurs had a difficult time changing film. To simplify this task, Kodak invented the instamatic film pack. This 126 roll film Kodapak fitted in the camera one way only. There was no need to insert an end and roll to a number, rewind, set film speed, etc. It was all automatic.

Critics said higher end cameras with faster lenses using the format were not worth buying since the pack’s film would not stay flat along the focal plane. However, for the amateur and family snap shooters, it was a blessing.

The film took off with the Kodak cameras that used it. Other makers like Argus (in the ad at left from p. 18 of the May 21, 1965 issue of LIFE magazine) also chose to design cameras using instamatic film to leap on the 126 bandwagon. Thanks to fellow PHSC member George Dunbar for highlighting this bit of pre-digital history.

This entry was posted in history and tagged Argus, film, Instamatic, Kodak, LIFE. Bookmark the permalink.