A tale of two cameras… 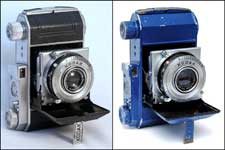 Toronto. Apologies to Mr Dickens again – he must be on my mind. My friend George Dunbar dropped me a note last Tuesday. George spotted an old Kodak Retina I on the internet and it reminded him of his first serious camera.

George writes, “Thought you may get a kick out of seeing my first “serious” camera – A Kodak Retina I. My parents bought it for me c.1948 from the Kodak store on Yonge St. Believe it cost about $75.00. ”

Surprisingly, the next night George mentioned that after he had the little Retina for a while the leather pasted to the metal body began to peel so he removed it and used a can of bright blue spray paint to create the one-of-a-kind camera you see here.

In 1980, at our October 19 meeting, I bought an old Retina II from the late Bill Belier for the same price. I took a few shots with it using XP-1 film to gain more leeway in exposures and allow me to leave an exposure meter behind.

The Retina series was Kodak’s entry into the high end 35mm camera world, a segment that began taking off in the 1930s. The cameras were initially designed and made by Dr.  August Nagel in Stuttgart, Germany. Kodak bought out both Nagel and his company at the end of 1931 using the name Kodak A.G. Dr Nagel developed the earlier pre war Retina cameras.

This entry was posted in Uncategorized. Bookmark the permalink.