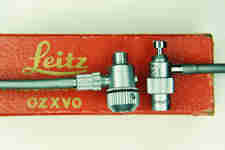 Toronto. Leitz with its Leica series cameras long felt that a rangefinder was better than an SLR camera for the majority of photographic activities. The SLR style or ground glass through the lens focussing was superior (in their opinion) solely for close ups and long focus lenses beyond 135mm (135mm was useful for either rangefinder or SLR). A mirror box was offered to convert the Leica to an SLR camera using a dual cable release to pop the mirror up and then release the shutter. The camera lens could be set wide open to focus, then stopped down for the exposure as was customary.

The mirror box and dual cable release necessitated a tripod or copy stand. To eliminate this limitation and allow hand held shots (like sports shots for example) using a PLOOT or a Visoflex I mirror box  in suitable daylight, Leitz came up with the OZXVO (later 16403) single cable release in 1953 which released the mirror in a mirror box momentarily before it operated the shutter of a screw (or with a camera adaptor) bayonet mount Leica.

There was a caution to NOT release the single cable at the camera end without the opposite end attached to a PLOOT or VISOFLEX housing in case the cable was damaged  by the release’s spring action. I have a couple of OZXVOs kicking around, one from Jim McKeen with its box and one from Ev Roseborough without a box.