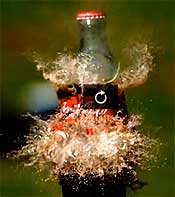 We can all remember slow motion film frames of yesteryear. As a youth I remember seeing Edgerton’s amazing high speed flash shots and replicating them with an old Ultrablitz flash at a slower 1/4000 second.  Imagine the capabilities of modern day cameras recording over 1,000 frames per second.

In this video, a pistol is used to shoot a bullet at various containers…

Paul writes. “I only noticed it in one of the shots but early in the video, look at the Maple Syrup bottles (two) and see the first begin to fracture from the on coming pressure wave of the bullet before it is actually struck.  ( At the 57 second mark in the video )  Also, the way a bullet acts while going through and after hitting something similar to a human body is evident in the way it tumbles after going through the Jelly and Peanut Butter jars.“

This entry was posted in activities, camera, events and tagged cameras, slow-motion, video. Bookmark the permalink.